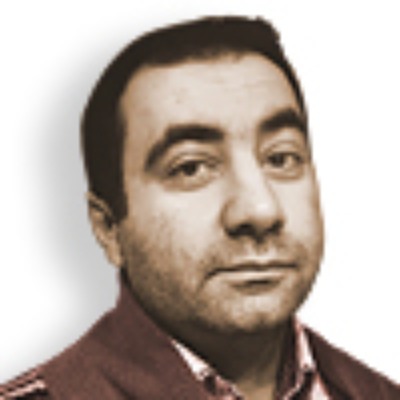 The only flowing Armenian fountain in Istanbul and Grandpa Krikor

There is a church in Boyacikoy, called Surp Yerits Mangants, and a fountain on this very street.

This fountain was built in 1843 by Misak Amira Misakian, the financier and tax collector of Mahmud II, in memory of his father Bedros.

Today I would like to tell you the story of the only Armenian fountain in Istanbul streets that still works.

This fountain is not a fountain in a church. Now is it a "holy spring". It is a public fountain that flows in a street behind a church in Yenikoy.

In 2000, Nazaret Ozsahakian took over the management of the church and after 14 years of struggle, he was able to obtain the deed for the fountain.

The church in Istanbul, of which I am a member and with which the Sayat Nova Choir is affiliated, was frequented by me and my contemporaries throughout our childhoods, both due to its large courtyard and for the cherished memories of our parents' generation. In its courtyard we met many Armenian musicians, such as the famous duduk player Civan Gasparian and Ara Dinkdjian.

There we met Nazaret Ozsahakian, who, thanks to his great open-mindedness, carried out many projects and put the church on its feet together with the congregation.

The fountain with Armenian inscriptions in the side street was difficult to miss every time we visited the church.

From the 1990s to the 2000s, every time we went to church, we noticed that the fountain got a little dirtier. Sometimes we found swear words written on it, and sometimes the neighbors would throw trash in the sink.

And if you tried to clean the marble, it wouldn't even come out even with bleach.

For years, this fountain has been the symbol for me of what can happen to an Armenian in a public place. If you keep quiet, you get dirty, they throw garbage on you, if you don't fight back, you get crushed, crumpled and worn out...

Today, this restored fountain serves the people of Istanbul and in particular the residents of Yenikoy. Thanks to the title deed obtained after 14 years of struggle, this fountain, which belongs to the Church Foundation, although it is located outside the land on which the church stands, represents a first in Istanbul and even in Turkey.

You won't be able to find another Armenian fountain open to the public.

When the fountain behind the Yerits Mangants Armenian Church in Boyacıkoy, whose title deed was transferred to the Sariyer Municipality after the cadastral survey in 1949, became dilapidated due to lack of maintenance, the church foundation sought to repair and protect the fountain in the 2000s.

The foundation of the Armenian church raised hopes when the regulation on the restitution of real estate belonging to minority foundations came into force, but bureaucracy prevailed in the first phase.

In the first phase, the Sariyer City Council declared that the fountain was historical and therefore could not be returned.

But they showed no intention of restoring it either.

Nazaret Ozsahakian demanded the "sale" of the fountain to the church foundation, but this also proved fruitless; as a result, the Sarıyer City Council and the Presidium declared, "We will restore the fountain instead of selling it." Eventually, the debt-ridden municipality could neither restore the fountain nor would they sell it.

Ozsahakian continued to struggle relentlessly through the bureaucracy.

He approached all the agencies, from the Monuments Authority to the Cultural Heritage Council, from the municipalities to the ministries, and even representatives of the political parties.

The General Directorate of Foundations finally included in the provisional Article 11 of Law No. 5737 that this fountain should be given to the Church Foundation. However, on the condition that it be listed in the 1936 Declaration.

Nazaret Ozsahakian said at the time:

"Excuse me, but did the directors of our church foundation sell the water from this well in 1936 so that it could be shown as an asset in the declaration?"

And he was right.

Moreover, the trustees of the foundation, not knowing what would happen in 1936, would not think that anything would happen to the fountain, so that they would include it in the list. In fact, almost all of the properties listed in the 1936 declaration were confiscated and that is why there is a lot of property that was not recorded. This is another issue another issue we know well.

The process started all over again in the late 2000s when they started to hand these properties back. I wrote last week about the ban on the sale of property to "foreigners" (by which they perhaps meants Assyrians) in and around Mardin during this period.

When the process began, the new CHP municipality had just taken office. The new administration showed no interest in returning the fountain. After encountering various difficulties at the Monument Authority, Ozsahakian was assured by the municipality that the bureaucratic procedures would continue if he sent a request for sale to the directorate. After many efforts, the knot was managed to be untied thanks to Gursel Tekin, then chairman of the Istanbul CHP. This led to a sixth application to the Monument Authority and a decision: "Since it is public property, the sale should be rejected, and if the foundation wants to restore the property, it should be allowed."

Another frustration. This meant that they didn't want to return the fountain and said, "We don't have the money, so go ahead and repair it if you want."

It was then that Laki Vingas, the then representative of the minority foundations in the General Assembly of the Foundations, announced that the title deed could be acquired. But it was another disappointment. This time, the title deed could not be issued due to the debts of the Sariyer Municipality's to the Social Security Institution (SGK). After a series of visits to the SGK, the Municipality, the AKP Provincial Board, the District Board, the Governor's Office, here and there, the deed was finally handed over to the Church Foundation on January 30, 2013.

Isn't that quite an adventure?

Throughout this adventure, Ozsahakian collects small but meaningful stories in his memory.

Let's share one of those anecdotes, one that has never been told anywhere except in private correspondence, which explains how the bureaucracy in Turkey and the various political and nationalist factions that are entrenched in the bureaucracy can be an obstacle to the functioning of democracy.

They go to the Monuments Authority in Ankara. There they meet with the reporter who is against the return of the fountain. Nazaret Ozsahakian keeps getting asked awkward questions like, "What are you going to do with the title of this fountain?" It was not his father's property, after all, but it was a heritage piece from his forefathers. Wouldn't it be better to restore it and make it useful for everyone than to let it fall into disrepair?

Ozsahakian did not succeed in convincing the reporter. When he realized that he would never be able to convince her, he said: "I would like to see your director."

Ozsahakian recounts his meeting with the director as follows: "The director is a man with a friendly face and an Anatolian mustache, I took a liking to him as soon as I saw him. As I enter, I say 'Salam alaikum' and he begins to examine the file. Unexpectedly, he starts offering solutions to the reporter, 'what if we did it like this or that'. But the lady continues to object. I think, the manager mistakes me for a Muslim, so he will see my business done. Finally, the manager turns to the reporter and says, 'OK, you can leave.'"

As the door closes, Ozsahakian is gripped by fear. He is afraid that his errand will not be done again. At the same time, he is annoyed that he was not greeted with a simple "good morning" when he entered, that he might be mistaken for a member of the opposing club, and that the foundation's business is going awry.

After the door closes, the director begins to tell his story. He tells that when his mother came to Ankara from Crete as an orphan at the age of 13, a certain Krikor and Meryem Ispir took her in and raised her as their own daughter, not as a maid, and when she reached marriage age, they bought a house on the same street because they thought, "what would we do if our daughter moved somewhere far away." After that, they also took care of their mother's three children (one of whom was the director himself) as if they were their own grandchildren, and when their parents traveled, they went to stay with their grandfather Krikor.

"I saw in the file that your name was Nazar, but for a moment I felt like I was standing in front of Grandfather Krikor. The voice inside me says, 'Pay back your debt of gratitude.' It is difficult to solve this problem within our bureaucratic system. But write such and such a petition," he said and had me submit another petition to the municipality."

We don't know if it was because the debt of gratitude to Grandfather Krikor had been fulfilled, but somehow, in 2013, the deed was finally handed over to the foundation.

"I've been here for ten years, I'm about to retire, and you're still going back and forth," the official from Sariyer Municipality's eminent domain department told Ozsahakian during the last application. Isn't that telling? The restoration of a well cannot be completed in this country within the time it takes for an official to retire.

And Nazareth Ahparik (brother) himself retired from our fountain affair. But he is standing again in the elections this week, which will be held under the new election regulations concerning the foundations.

Not out of love for the seat, but out of necessity. Because we don't have a large number of constituents in Yenikoy.

There is only struggle there...